BIG NEWS – Andy Bojczuk joins the ‘Polka Dreams @ Sea’ polka cruise – Apr 2-9, 2017 on the Carnival Pride out of Baltimore. There are still a few cabins left at the original prices. They will be gone after next Monday, Jan 16th so call right away if you still want to come along. After that the prices go up about $300 per person, so don’t delay. So call Helga NOW – 724-234-2033.

We’ll be going out of Baltimore this time, to the fun & sun filled Bahamas – visiting the islands of Grand Turk, Freeport & Half Moon Cay®. Half Moon Cay® is an beachy private island owned by Holland America Lines – another of the cruise lines owned by Carnival Corporation. This island recently went thru a multi-million dollar renovation to add some fun things to do.

Our featured bands this year are some of the best bands on the polka scene – “Buffalo Concertina All-Stars” from NY and special guest star “Ray Jay” of “Ray Jay and the Carousels” from PA. We will also have the “Polka Dreams All-Star Band*” featuring some of the biggest & hottest polka stars in the country – 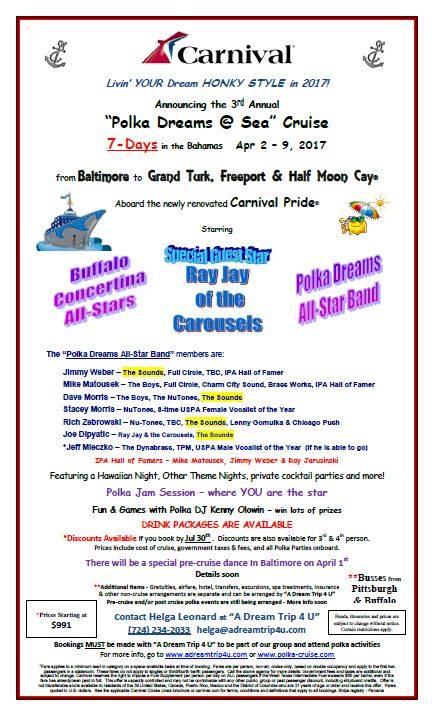